The dangers of vaping for teens 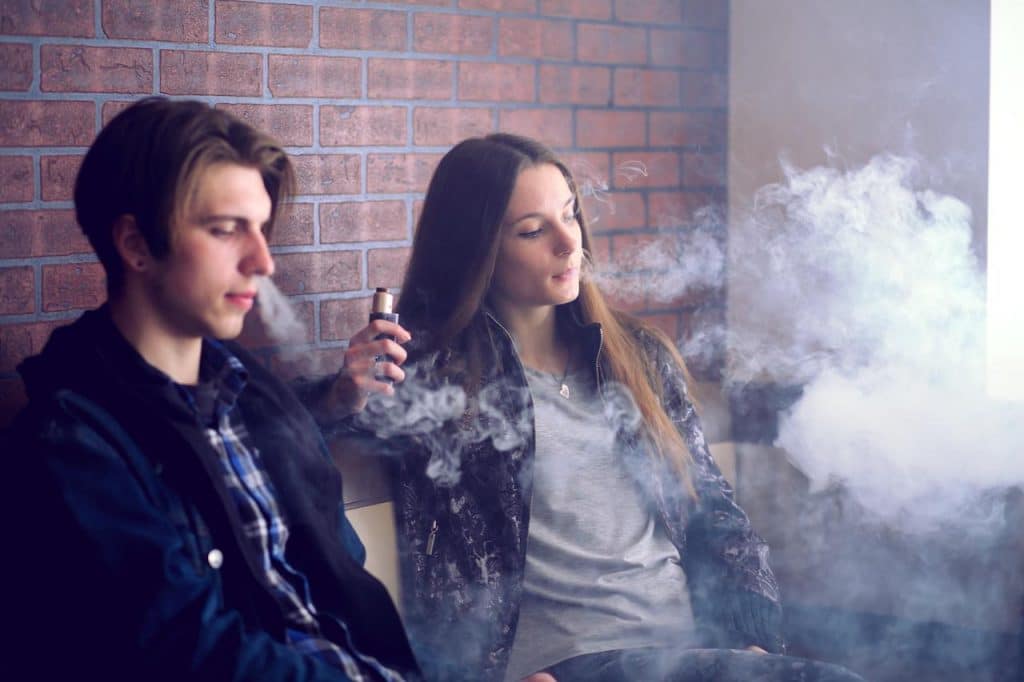 Vaping and e-cigarettes usage is only increasing amongst teenagers hence we need to educate teens (and ourselves) about this growing concern.

Take a look at what this new form of addiction is, why it’s dangerous and how to help the teens in your care avoid this health-destroying habit.

Also known as e-cigarettes or electronic nicotine delivery systems (ENDS), vaping devices are battery-powered smoking implements. Inside the cartridge is a liquid made from nicotine, flavourings and other chemicals. When you use the device, a ‘vapour’ is created, which can be inhaled by the user.

Vaping devices are usually sleek, metallic or brightly coloured prisms which you could mistake for a cigarette lighter or a USB that plugs into your computer. Unlike cigarettes, which come in plain packaging with warnings, vaping devices are attractive and don’t seem to have a great deal of marketing legislation. For example, online vape stores promote their products as ‘delicious’ and promote vaping as a way to stop smoking cigarettes.

Is vaping better than smoking?

According to the Australian Government’s Department of Health, “e-cigarettes do not produce the tar produced by conventional cigarettes which is the main cause of lung cancer. However, many scientists are concerned that using e-cigarettes could increase risk of lung disease, heart disease and cancer.”

And although scientists are still learning about the dangers of vaping, the current belief is that they are not safe. This is because they contain harmful chemicals.

Using e-cigarettes has also been shown to have a strong association with becoming a smoker in the future.

Most e-cigarettes contain nicotine, which is the drug in cigarettes that is so easy to get addicted to. Nicotine can be very harmful for the developing teenage brain. According to tobaccofreeca.com, nicotine actually changes adolescents’ brain cell activity in the parts of the brain responsible for attention, learning, and memory. It can also worsen anxiety, irritability and impulsivity.

While the long-term health effects of e-cigarettes haven’t been confirmed, there are very, very few scientists and health professionals who would not advise extreme caution, especially for teens.

You may have already spotted some teens in your school sneaking off for a ‘vape’. If so, it helps to be aware of the dangers of vaping and also the stages of addiction.

The Stages of Addiction

Psychological addiction in its most basic form can be split into four stages. Nobody begins using a substance with the intent of getting hooked. But more often than not that is exactly what happens.

The four stages of addiction can be classified as: Experimentation, Misuse, Fixation and Dependence.

This is also called the initiation phase and commonly occurs within adolescence. First-time engagement is often not planned or organised. A teen might be at a party where an e-cigarette is being smoked and someone offers them a toke. They may not have planned to smoke at the party but, given the opportunity, they participate.

Teens rarely experiment with drugs alone. The urge to try vaping arises out of a strong and understandable sense of curiosity.

During this phase, teens learn how the substance alters their mood and changes their emotions.

For young people involved in this early form of addiction, the most powerful form of helpful intervention is information. The more informed they are about the consequences of their actions, the more empowered they are to make worthy choices. There is ample research on the harms of vaping. Stay well informed. This is the information age.

Addiction is progressive. The more teens choose to experiment, the more likely they will move to the next level, which is the misuse stage.

Other features of the misuse phase are that teens start to plan their vaping, even though they are aware of the dangers. The urge to engage arises out of fond memories. They also start to develop a pattern of use, where the behaviour starts to become a habit.

Many young people in this phase tend to establish ‘safe rules’. These are self-imposed rules devised to stop the participant from slipping over the edge into full-blown addiction. Typical statements made are: ‘I only vape after school. I would never vape at lunchtime’.

When teens reach this phase, their use can become a problem very quickly.

To intervene and disrupt a young person’s behaviour, communication is vital. The individual in this stage needs to develop relationships with people they can talk to about issues like pain and failure. They also need to establish networks with people who don’t engage in this behaviour.

In its most basic form in relation to substance abuse, it means the more you have of a substance, the more you need to sustain the same high. Now, the user needs more nicotine to change their emotions. At first, one ‘vape’ was enough. But suddenly there is the longing for more. This is when the ‘safe rules’ start to be broken.

The urge to use now arises as a response to stress. During the day and night the addict’s mind wanders to the addictive behaviour and when the next engagement will occur. The love for the habit becomes obsessive.

The seemingly insurmountable stress a person feels when they are completely fixated on the substance sends this person into meltdown. The only thing the user trusts now is the substance. Their mind starts to connect the dots. The only way to alleviate the pain brought on by the stresses they are experiencing is to vape more frequently. The user is self-prescribing drugs to regulate his or her feelings. Nothing is more reliable than the substance or the way it makes them feel. The relationship knot is now completely tied.

The fourth and final stage of addiction is dependence, also called the stage of full-blown addiction. In this stage the person aches to experience the addiction continuously.

The user’s body and brain begin to change. In this phase the addict uses the substance to just feel normal. Without it, life is full of pain and anxiety. Often the addict will talk about running away from their problems. They will say: ‘If only I could move somewhere else and get away from all of this.’ But the problem with this statement is that ‘wherever you go there you are’. The problem is now internal.

By stages three and four, information is not helpful. The addict knows they are addicted but cannot stop. Trying to reason with an addict and provide information on the dangers of substance abuse is a waste of time and energy.

The definition of an addict is: one who willingly gives himself over to a practice or a habit. When I read that, I felt a little confused; who would willingly want to become an addict? I am positive nobody dreams of being so anxious to find a spot to vape that they completely miss all the information in an important HSC lesson, or never getting ahead financially because every spare dollar goes to their vaping addiction.

The way I see it, you become an addict when you willingly decide you will experiment. It was an act of your will to say yes, when you should have said no.

Lastly below are 5 interventions to get you back on the right track where you are happy, healthy and living your best life.

A problem shared is a problem halved. We all need help from time to time. Reach out to someone you trust. They will be proud of you for wanting to get your life back on track. Having someone in your corner to provide encouragement and reassurance can be a powerful support.

2. Write down your dreams

Developing a compelling future, empowers us in the present and gives us the necessary strength to overcome our foibles. Sacrificing a short term pleasure could potentially solve an array of complex problems in our future.

Using nicotine at any age may be an attempt to handle stress. Finding healthy alternatives like mindfulness, regulating your emotions, exercise or talking about your concerns is vital to helping you kick the habit.

Anyone with too much time on their hands can easily find themselves in trouble. Staying future focused and productive is another great way to help you stay on the right track plus open you up to new opportunities.

Try and master a new physical discipline. It could be becoming proficient with pushups or chin-ups, walking 15,000 steps a day, or perfecting the double skip. Plus feeling good physically sends positive emotions surging through your system making you less likely to participate in physically weakening activities.

During my late teens I ended up losing five years of my life due to a serious illness. Twenty years later I am still experiencing the fallout the illness wrought on my body. The debilitating feeling of ill health can be demoralising. It is easy to see how ill health can have an effect on your mood, wellbeing and levels of happiness. I did not choose to have this illness nor the effect it had on my life. Yet I see so many young people choose the serious health risks associated with vaping not realising the long term effects it will have on the quality of their life.

Life is a matter of choices and every choice you make makes you. John Maxwell.

For more information about our Addiction Seminar click here. 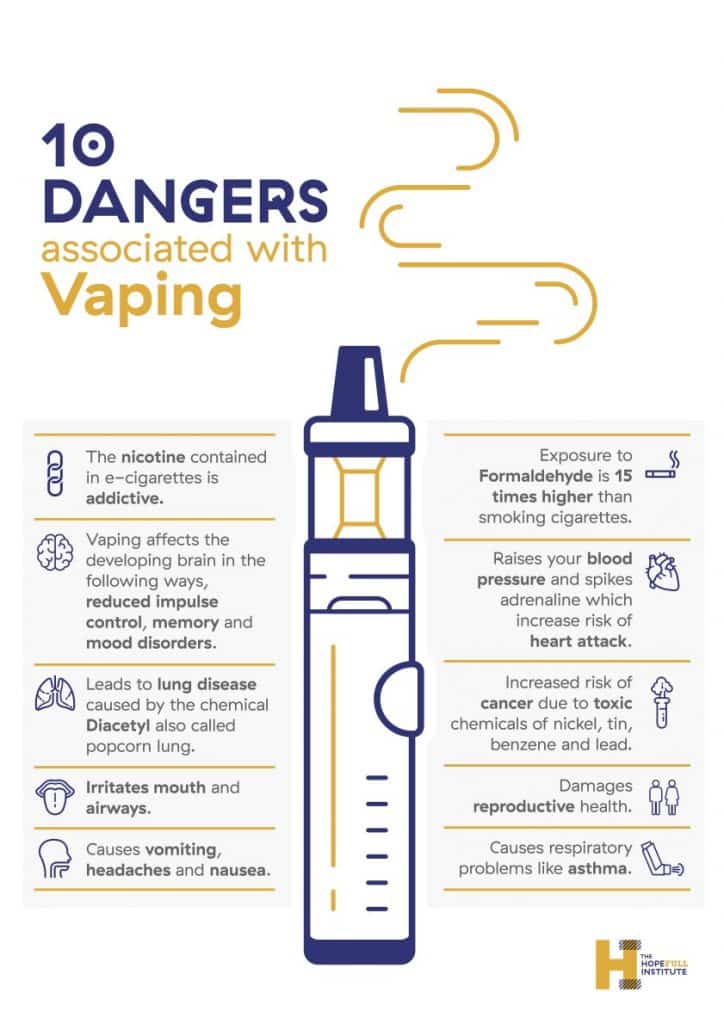