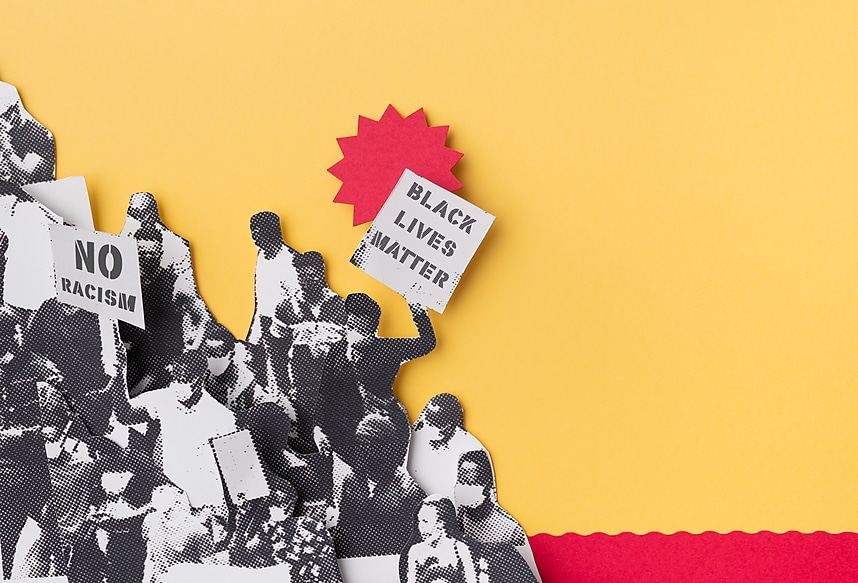 Black Lives Matters has now swept the globe and many students are wondering how they can contribute in a way that’s meaningful and respectful.

This year, we have all been unwittingly plunged into a time of global awakening on racist and unjust acts like the one recently committed upon George Floyd in the USA.

When we discover an act of inhumanity like this, it should cause us to pause, reflect and examine our own subtle prejudices or how we have been impacted by racist acts. This is what’s going on right now, in a number of different ways, with the Black Lives Matter movement.

This huge movement has gone global and highlighted that conversations need to be had, because empathy and understanding are lost if we don’t stop and have difficult discussions.

Today I want to share some of my own personal experiences and offer some advice to students about how they can peacefully and meaningfully react to this situation in a way that lasts longer than the protest movement.

Over the course of my life I too, have encountered racism. Whether it was being forced out of a primary school because of racial taunts, denied rental properties until I sent my white friend, being spat on by a Nazi, called the ‘N’ word or monkey on the high school rugby field or had people cross to the other side of the street as I approached. I’ve even had a respected mentor tell me to be to be “less black” as a speaker.

Most of these acts have long been forgotten about and I do not carry any angst or hatred, because honestly it is what I expected in certain situations. It has forever been the common narrative of humanity.

The acts were obviously committed by the smallest fractions of society. Most people are courteous and polite. But it didn’t make the taunts any less hurtful at the time.

Some would prefer I not mention any of the above. To ignore it and sweep it under the carpet so as to not create any disruption. But I don’t believe anyone who has experienced racism wants to create more disruption.

What everybody who has experienced racism wants is more love, compassion, empathy and change.

When the global consciousness is pierced, as it has been by George Floyd’s death, we need to have a conversation. It is incredibly important for students to get involved in this discussion if they want to seize their chance to make the world a better, fairer place.

While there may be an urge to take to the streets and protest, this doesn’t have to be the only way to join the movement. And indeed, it is taking long term action rather than attending a protest for an afternoon that will make a real difference to the world.

Below are five ways students can give voice to what they are seeing and experiencing right now and empower themselves to instigate change:

Before we take a stand, we need to take a seat. This means talking to people of ethnic or coloured backgrounds and asking how these or other racially charged events have impacted them. What does it mean to be a person of colour in this modern world? We then must listen to their answers with empathy and humility.

To walk in the shoes of others who have experienced subliminal or micro-aggressions is an act of grace.

Racial tension tends to clump everybody into ‘us’ and ‘them’. But when you spend time with an individual, you see things much more clearly. No two people are exactly the same and no two people share the same outlook on the world.

Sit down in the presence of people of different racial backgrounds. Become acquainted with their hopes and dreams, distresses and worries and do not deduce the depictions of what you see in TV headlines or social media as truely authentic and applying to every person.

Taking a seat means asking ‘why’? When I recently asked a friend what he thought about George Floyd, his immediate response was disgust because of the riots. I feel he missed the point. Of course people are angry and hurt. But can we talk about the inhumanity of a police officer’s knee on the neck of a handcuffed, unarmed man as he cried for his mum, before we talk about the pain and devastation of the riots? Let us ask first why people rioted, before we discuss the riot itself. First things first.

Why did the police officer feel the need to be so violent? What were his convictions that led to this act? Why was George Floyd in a position where he came to be arrested? What had he experienced in the lead up to that point in his life? How could things have been different? Is this a pattern? How were the circumstances different with Breonna Taylor, Ahmaud Arbery or Michael Brown?

Take a seat and let other people give you the gift of their lens and any prejudice beliefs will hopefully begin to disperse.

Most schools in Australia are blessed with faces from a range of different cultures and races. Inviting students or guest speakers to share their experiences of growing up is one way to encourage the ‘take a seat’ approach.

The death of a single black person thousands of kilometres away is a sad event but students who live in a uni-cultural environment and don’t have a lot of diversity amongst their friends and family may think ‘What can I do about it?’

As you grow up and move further into the world, it is a lot harder to get lost if you have a map. I think it’s important we can all articulate a framework by which we endeavour to live our life. We should all have some sort of map, or blueprint, or a north star that points our life in a certain direction.

No matter where they live or who they are surrounded by, students can set their own true north at any time and make a personal commitment not to discriminate, judge or unfairly treat anybody based on their skin colour or family history.

Your true north may go beyond simply upholding your own standards. It could also include a commitment to call out others who demonstrate racist behaviour. Many Australians have voiced their own values in public when seeing someone behaving badly. Doing so is a powerful way to let someone know their attitude isn’t good enough.

3. Be watchful for rigidity

In a dynamic, complex and interconnected world, it is easy when faced with complicated situations to respond in ways that are familiar and routine. This gives us a sense of comfort and control.

People follow cultural edicts without ever questioning why. During Covid-19 I actually heard people say, “I’m not racist, I just don’t like Chinese people”. Because the virus is believed to have originated in China, its people are being targeted and somehow blamed.

Prejudice emanates from speculation, blame and judgement. We must rather work to maintain an open spirit, letting go of corrosive ideas and deliberately cultivating new understandings based on fact, not hearsay.

It is essential that young people learn to resist the temptation to become defensive if their ways are brought into question. We shouldn’t ever allow ourselves to become hooked on a certain idea and then hold on to it with a closed mind.

Years ago, people were told and believed that smoking cigarettes was good for them! The evidence changed and health organisations told us smoking is harmful but it took a long time for the habit to be kicked (we’re not even there yet).

Racist beliefs can be similar; even though we know each person should have the same rights and opportunities, prejudice and discriminatory thoughts can be hard-wired and go back for generations. With time, however, and a willingness to listen and understand, the world can change.

4. Go home and talk to your parents and grandparents

All of us need to know what is in our heart and how it got in there. There are racist black people just like there are racist white people. We all have a collective responsibility to search our hearts if we are to move forward.

Talk to your family about how you feel and what you can do together to build bridges. It shouldn’t take the images of a black man’s life ebbing away on camera for us to talk about racism.

We may never experience the type of racism we have seen in countries like America or during apartheid in South Africa, but that doesn’t mean we should turn a blind eye and pretend it doesn’t exist. We are global citizens and I believe we cannot just feel bad about the injustices we have seen and wait for the protest movement to blow over so we can resume ‘normal life’.

We must take action, even if it’s just one conversation at a time.

The protests have been an important way for people to express their hurt and emotions over the death of George Floyd and others like him, including in Indigenous communities in Australia.

Students who want to take things a step further than marching in the streets all have the power to reach out to their local member of parliament or other politicians to share their thoughts, concerns and even ideas about reducing the impact of racism on our society.

Take a look at which parts of Australian legislation could be revised or reviewed, including the way people are held responsible for the treatment of others. Make your suggestions and let the people in power know how you feel. It may feel futile to send one letter but it is better than doing nothing.

Students can also create or sign petitions to send to those in Government. When enough voices come together, the people in power understand that they can either listen and take action or fail to respond and face losing their position as a representative of the people.

While sharing a hashtag on social media is a step towards solidarity, following it up with even more affirmative action demonstrates a commitment to lasting change.

Schools in Australia should all have their own anti-racism policies.

Black Lives Matter presents a good opportunity to review those policies as a group and discuss why they are important.

As the NSW Government’s Anti Racism Education Advice for Schools points out, “Strategies in anti-racism education can involve staff, students or the whole school community. They can be a single activity or a combination of activities implemented to promote change over time across a number of areas.”

If you’re a student and the issue of racism feels important to you, reach out to your teachers and school leaders to see if your community can come together for a discussion and some action points on the subject.

Helpful resources in the discussion about racism and discrimination

There are resources for teachers and students to refer to here: :https://www.racismnoway.com.au/

The Danger of a Single Story: Chimamanda Ngozi Adichie
https://www.ted.com/talks/chimamanda_ngozi_adichie_the_danger_of_a_single_story?utm_campaign=tedspread&utm_medium=referral&utm_source=tedcomshare